The Case of the Hidden Hatchet Job

My name is Cappy Kidd. I'm an energy detective and I had been summoned urgently to a section of Chicago where you would swear you were in another place and time. Everything looks different and old. Narrow brick-paved alleys meander this way and that. Where are the rectangles of the city's grid? 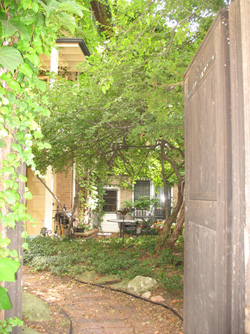 I found myself in one of these alleys in what is known as Old Town. It's one of the first areas to recover shortly after the great Chicago fire of 1871 and is graced now with fine Victorian houses and town homes. As I cruised through the alley, I noticed the high walls enclosing the back yards of these stately homes. Some of the walls were capped with gaslights and --was that a hitching post by the gate?

I had arrived at the back entry of my client's yard. There was just enough room to park the car. Curious, I hadn't spotted another motor vehicle since I turned into the alley. My client's name was carved over the gate--Watson. 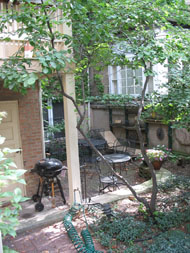 The thick brick walls were covered with moss and ivy. I let myself through the unlocked gate and passed through the English garden. The back of the three-story townhouse was covered with more ivy. At the top of the stairs stood the lady of the house. "Mrs. Watson, I presume."

Welcoming me inside, Mrs. Watson offered me tea and biscotti. "My husband's in his study. He's been expecting you," she said. As we passed out of the kitchen through a hallway I noticed the plaque. Seems my client had recently retired after years of serving as a distinguished professor and head of his department at a prestigious medical school.

When I met Dr. Watson, he was all smiles. "This is a drafty old house, built in the 80's," he told me. The 1880s, that is. "My friend and I have been trying to find the leaks. He is a detective like you, but I must say, so far the source of the breezes has eluded us."

Had they made any alterations since their purchase of the house many years back, I asked. Mrs. Watson confirmed the new windows and the retrofit of a central air-conditioning system.

In the attic I observed nearly perfect insulation installed against the rafter--fiberglass batts first, then rigid polyisocyanurate board below covering all the rafters and supplying the air pressure boundary. But what I saw next alarmed me. 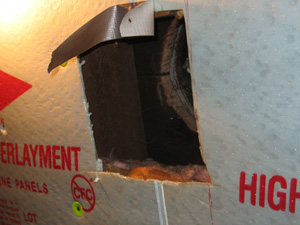 Through this insulation and through the roof someone had cut three one-foot square holes to "provide attic ventilation". If you have read our previous cases, you will know what this means. Trouble.

I went to the car to get my test instruments. I was relieved to find that the gear I unpacked was strictly 21st century stuff: infrared scanner, blower door with digital monometer operated by a microprocessor, digital infrared thermometers and annemometers. And then there were the smoke puffers. Well, I'm not really sure what century they come from. 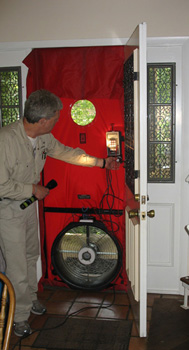 Running the blower door, the first reading was 5500 cubic feet per minute at a depressurization of -50 Pascals. I closed the fireplace dampers. The reading dropped to 5,000. With some cardboard and duct tape I closed off the foot-square holes in the attic one by one. The air volume dropped to 4,000 cubic feet per minute, then 3800--a 31% reduction in fifteen minutes. My clients were in luck. This initial discovery was an easy fix. 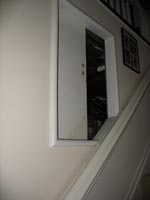 With the blower door still running, Dr. Watson and I were walking up the stairs when I felt a blast of wind in my face. Midway up the staircase there was a cubbyhole door in the wall. Quickly I opened the door the rest of the way and peered inside. What I saw was astonishing, and I don't mean "many wonderful things" to paraphrase the man who discovered King Tut's tomb. No, we had chanced upon an atrocity, what I could only call a hidden hatchet job, carried out by the mechanics who had installed the new air-conditioning system.

It is not uncommon in older houses built without ductwork for high-velocity air-conditioning systems to be installed. We recognize them by their signature registers in the walls, two concentric circles, a faceplate and an air delivery tube. Air is supplied through small-diameter flexible round ducts. These small tubes can be threaded through confined wall and floor cavities and reach throughout the house.

The problem is not so much in the ductwork, although I did test it and sometimes found it to be leaky. The gross violation is what the culprits left behind after hacking through the walls and ceilings to install the system. At one end of the house, the holes around the new ducts were properly sealed, but here was a whole batch of unsealed gaping holes. It was like an octopus whose tentacles of flexible duct squirmed through floors, closets, ceilings and numerous concealed paths, to open the passage of air through all the chases of the house up to the vented attic. Throughout the house, there was a perfect pipeline delivering hot air in the summer and frigid air in winter. Take a look and judge for yourself. 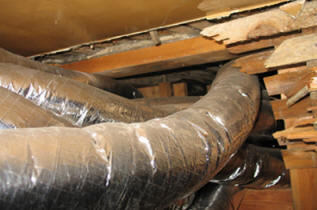 Was this hatchet job a case of "out of sight, out of mind" or had the installers received their final check and called it a day? I'm an energy detective, not a psychologist. At the least, these mechanics could use some training in building science to better appreciate the gravity of their error. And if they are reading this story, they should be sure to call us to join our next training session.

I wrote out a Scope of Work for my clients and put them in touch with an air-seal contractor who will repair the damage that the hatchet-men have done. As I began reloading the equipment into my car, Mrs. Watson sighed, "If only our detective friend could have met a real energy detective."

Dr. Watson chuckled, "It's your equipment Holmes would be most interested in. If he had these gadgets, he'd have been able to solve the problem on the double quick." "With all due respect to the great detective," I retorted, "Mr. Holmes would also have to catch up on one hundred years of building science." "Ah yes," replied Watson. "As he likes to say, "Education never ends. It is a series of lessons."" And upon hearing those words of wisdom, I returned gladly to my own place and time.

Until it's time to post our next case, you can catch us at the desk or by the car with the sign that says, "Energy Detectives - we're on the case to make buildings more energy efficient."