There are millions of buildings in the Chicago area, each with its own story to tell.  Sometimes things go awry. The story you are about to read is true, the names have been omitted to protect the innocent.

My partner’s name is Porterfield. My name is Cappy Kidd. We’re Energy Detectives.

Once again, a cold wind was coming across the prairie. It was Friday and we were lost on a country road, vowing never to trust Map Quest. With the help of cell phones, we finally arrived at the scene of the crime, a custom built 60’s ranch home with open-beamed ceilings and lots of glass. Despite paying $500 a month ransom to the local gas company, our homeowner and his family still had to wear blankets around the house.

In the initial interview, our client had described several areas where the floors were cold. The house was built over a crawl space, so I got out my Tyveck suit, gloves and kneepads and provided the client with similar attire. With flashlights at the ready we descended into the realm of spider webs and dust, leaving John to scan the upper reaches with infrared. 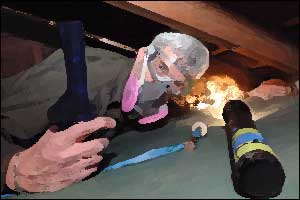 Although there were many problems in the crawl space that contributed to cold floors, we noticed something far more suspect. There were large gaps around the heating and airconditioning ducts as they led upward into the house. Where exactly were they going? Were they involved in the import of cold air?

Upstairs we found that the architect and builder had used a series of closets and ceiling soffits to conceal the heating ducts. By itself, these were not evidence of wrongdoing but what else were they hiding?. Upon further questioning of our client, he admitted that a roofer had convinced him to add a ridge vent when he re-roofed the house. A fateful decision, indeed.

Imagine a series of interconnected vertical and horizontal passageways that make up the HVAC ductwork. Now imagine that these passageways are connected to outside air via the new ridge vent. When the furnace runs, the return “duct” in the closet sucks in frigid, outside air, and when the furnace cycle is over, the warm air has carte blanche to escape via the ridge vent. Where once there had been a functional air pressure boundary, the ridge vent now created a perfect pathway to the outside.

Every building has an envelope, an air pressure boundary that separates interior from exterior air. Typically, this pressure boundary consists of the walls, floors and ceiling. Most people, including most roofing contractors, mistakenly assume that the attic space and the conditioned space in the house below are separated by the ceiling of the top floor. In reality, these spaces are connected by dozens to hundreds of pathways, some as small as a pencil and others as large as a door, turning your pressure boundary into Swiss cheese. Common breaks in the pressure boundary can include drop soffits, recessed down lights, holes for pipes, conduits and ductwork, and, as you can now see, even ridge vents.

In this case, the roof had once served as both thermal and air pressure boundaries. Since the roofers did not understand the system, the addition of ridge vents had violated the boundaries, creating a super highway between inside and outside air. In addition to hastening the departure of expensive conditioned indoor air, inappropriate installment of ridge vents can increase the moisture content in the attic and lead to mold, mildew, ice dams, frigid interiors...all a consequence of misunderstanding the role of pressure and thermal boundaries.

We thought this case was closed, but the following week we were onto a widespread pattern of house abuse that can only be described as a crime wave. While the configurations were different, the culprit was the same, and the results were shocking. Following standard procedure, well-intentioned roofers were running rampant retrofitting ridge vents with no air sealing in sight.

Fortunately, we have armed our homeowners with an understanding of the problem and, with our recommendations for repairs, they can make corrections to improve the performance of their buildings.

Here's a tip from the Energy Detectives. Attics or roofs can be designed and constructed to be vented or un-vented. Either type will work successfully in any climate zone. However, if you choose to vent the roof, be sure that unconditioned attic space is completely sealed off from conditioned air in the interior of the home. As always, it’s best if the builders and trades people do it right the first time.

I would like to reveal the clues and evidence that we uncovered at the other buildings, but no time. We just got an emergency call from an anxious homeowner who said: “Help! Our house has been freezing ever since the new roof was installed…..”

Stay tuned for “Where’s There’s Smoke, There Could Be Fire”.